This was the culmination of four stressful years in the fall of 2015. (Well for this mom anyway!) Zack went on his mission to Tulsa, OK for two years. Then two weeks after he returned, Riley headed off to serve in Tucson, AZ for two years. Krystal left two weeks following to Oklahoma City, OK for 18 months. Riley was the final one home. (Phew!) It was funny, because Zack pretty much dumped out his suitcases for Riley to use! Krystal got new ones. Getting them all outfitted and ready to depart was quite a task. (Needless to say, a drain on the pocketbook. A big thank you to all those who contributed!) We luckily had one homecoming/farewell(s) church meeting and get-together party. Darin was ecstatic. (One less thing, well two.) I had a world map for everyone to pin where they served. It was covered. Our kids all served their missions in the states, (a little less worry) and we all anticipated Monday’s and Mother’s Day and Christmas with bated breath. A few calls had to be coordinated so there was no overlapping. Those little bits of communication with my absent children were priceless. I would write one letter with many details and e-mail to Krystal. Then I would take the same letter. Cut out all the details I knew Riley wouldn’t care about, add a few other details just for him, and send to Elder Beckstead. Zack wrote quite a few details. Krystal’s letters were much longer! But Riley’s were good, brief, and to the point. I went to two Missionary Mommies retreats, and met some fellow mom friends that I will always cherish. My favorite part was a sing-a-long with Janice Kapp Perry. We also were lucky enough to create dear friends from the field.

We were proud members of the 800 club. (Thats what it cost!) We’re so lucky. (Said sarcastically.) But we decided it was less than having them at home! (Many people monetarily helped, thank you, thank you, thank you!) I am so incredibly proud of their service and the fact they gained life experience. They already know how to live with a companion, how to work with a schedule, and make a cold call. (To name just a few.) The girls don’t say “if” they serve a mission, but ‘when.” They had three honorable examples. The Spirit in our home when a missionary returns is very awesome. They bring the mission feeling back home with them. Its almost like the temple. The first few words out of Krystal’s mouth was, “So is everybody reading their Book of Mormons?” (Books of Mormon?) We listened to hymns all the way home. They will all have priceless memories for the rest of their lives! (So will I.) Some people ask how we raised three wonderful missionaries. (I don’t know!) We just got seriously lucky. (It takes a village to raise a missionary!)

Fun on the airport moving sidewalk. 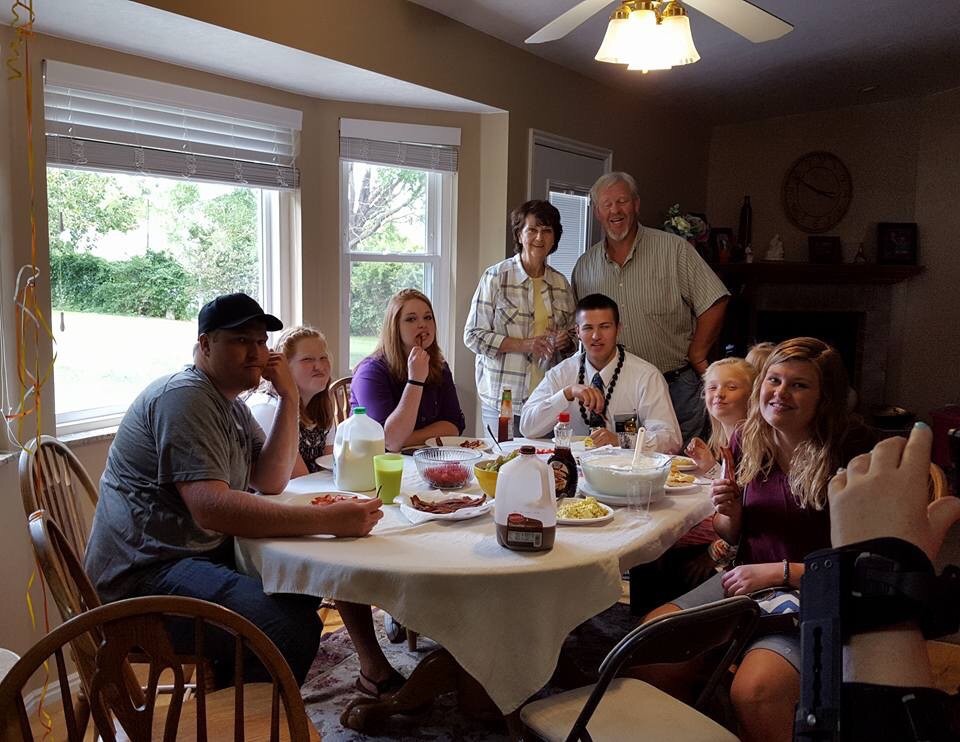 Julie made Riley a large bacon breakfast when he came home. The same breakfast she made before he went to the MTC!

We family pictures taken after Riley returned, this was up High Creek near Richmond, Utah.